The Root Causes Of Why The Tire Recall System Is Failing

Thousands of motorists may be driving on tires that have been recalled but, because of breakdowns in how this information is communicated, these drivers are unaware that their vehicle is riding on a ticking time bomb. 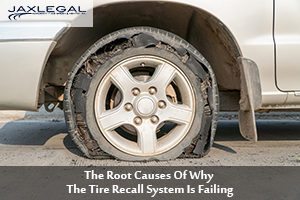 The system set up to inform drivers about tire recalls remains imperfect and, as a result, tire blowouts can occur without warning causing accidents that result in injuries and death.

Here’s how the system is failing.

According to an article on the ABC News website, the National Transportation Safety Board (NTSB) recently completed an investigation into tire recalls and found that the existing system is plagued with problems that make it difficult to inform drivers that their tires need replacing.

“Today’s report is the outcome of these investigations that uncovered several issues,” stated NTSB Chairman Christopher Hart, “some of which are systemic, that consumers cannot address on their own. The current system for tire registration and recalls has proven ineffective.”

The NTSB has found that as many as 500 car accident fatalities each year are directly related to tire failure, which includes tire blowouts, punctured tires, and tires with worn-out treads.

The big issue is that tire sellers and manufacturers are unable to contact some drivers and inform them of a recall because those drivers did not register their tires with the manufacturer or the independent tire seller.

In fact, most drivers are not aware that they have to register every tire they purchase so that – in the event of a recall – the seller has their contact information.

As a result, the lack of communication often means that owners of vehicles under a tire recall have no idea that they are driving on a defective tire that could fail at any time and cause a car accident.

From 2009 to 2013, there was an estimated three million tire recalls in the U.S, but a staggering 44 percent of those tires were never exchanged for new tires.

It is not simply a lack of communication from tire seller to driver that is causing the problem. Another complication is that the government does not require independent tire sellers to register what are known as “replacement tires,” which are tires that are not the original tires that came with a vehicle.

Replacement tires that do not come from a major manufacturer may not be made to the same quality standards as original tires, but they are less expensive which is often why they are popular.

Tire retailers often don’t register the purchasers of these replacement tires with the government, meaning that they will not receive tire recall information.

The other problem is that the government does not have a national tire database that could bypass independent sellers and establish a master list of drivers who bought tires throughout the country, whether from a major tire manufacturer or an independent seller.

The NTSB has proposed a lookup system based on the Tire Identification Number (TIN) that is stamped on every tire sold in the U.S.

The system would require every tire seller in the country to list the TIN on the NTSB website, allowing drivers to check their TINs against the master list to find out about any recalls.

Justice Means More Than A Settlement

If you’ve been injured due to a defective tire or for some other reason, you need the services of a respected and resourceful personal injury law firm to investigate and file your claim. That’s why the team at Hardesty, Tyde, Green, Ashton & Clifton, P.A. is committed to providing you with a compassionate representation that is as much about restoring your physical and mental well-being as it is about securing equitable compensation. Please call us at (904) 414-4906 for a free legal consultation.