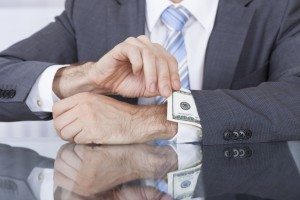 Most associate “white collar” criminals with business professionals. The term “white collar” often refers to the working class such as government officials, accountants, stockbrokers, securities officers, and other higher-level executives. However, the truth is a “white collar” crime can be committed by anyone.

“White collar crimes” are typically committed by salaried business professionals, which involve a form of theft or fraud—such as securities dealings.

Some common “white collar” crimes include:

Depending on the nature of the case and circumstances, the punishments and sentences for white-collar crimes can vary. However, typical punishments include paying hefty penalties and fines, restitution, and even imprisonment.

Additionally, depending on the severity and damages involved in the crime, white-collar crime can involve civil lawsuits and even federal punishments.

White-collar crimes are highly technical and involve a great deal of research and case preparation before going to trial. In some cases, it can take years to settle a white-collar crime. But regardless of the case, a White Collar Crime Attorney in Jacksonville, Florida can help you through any legal process.

If you have been charged with or are currently under investigation for a white-collar crime, contact an attorney today. The legal team at Hardesty, Tyde, Green & Ashton, P.A. can help. We are an aggressive team and we will fight to protect your rights. Find out how we can help today.